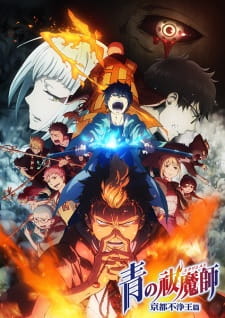 Plot Summary: The ExWire of True Cross Academy are beset with shock and fear in the aftermath of discovering that one of their own classmates, Rin Okumura, is the son of Satan. But for the moment, they have more pressing concerns than that of Rin's parentage: the left eye of the Impure King, a powerful demon, has been stolen from the academy's Deep Keep. After an attempt is made to steal the right eye in Kyoto as well, Rin and the other ExWires are sent to investigate the mystery behind the Impure King and the ultimate goal of the thief. While this mission has them cooperating for the time being, Rin has never felt more distant from his fellow exorcists. In his attempt to reconcile with them, he undergoes specialized training to control his dark power. However, when the right eye is stolen not long after their arrival, the unthinkable threat of a traitor amongst them leaves them in need of all the power they can get.