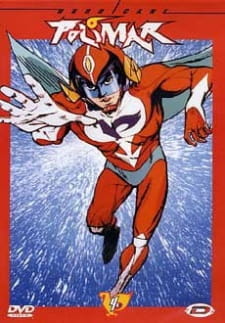 Plot Summary: Yoroi Takeshi is a carefree and somewhat naïve youth, who works as an assistant to the bumbling detective wannabe Kuruma Jo (who frequently proclaims himself the heir apparent to the title of Greatest Detective “Sherlock Holmes”). From their rundown and shabby office, they run a humble if not failing private investigation service. The spunky and cute Nanba Teru (who’s father owns the building when Jo and Takeshi reside in) frequently interferes in their affairs by threatening eviction (Jo is continually months behind in back rent). Since they rarely get any clients, they must resort to eavesdropping and spying on the Secret International Police Department headquarters, located in the building across from theirs in order to get their assignments. Unbeknownst to Jo and Teru, Takeshi has a deep secret. Not only is Takeshi the son of the International Police Department Chief but in times of peril and danger, mild-mannered Takeshi uses his trusty Poly-Met (Polymer Helmet) to transform into the Superhero “Hurricane” Polymer, a red suited masked man with incredible fighting abilities and superhuman strength. The only one who knows Takeshi’s secret is his lazy Saint Bernard, Daisaku, who always likes to provide cutting commentary to the audience (using his inner voice). Together Jo and Takeshi (as Polymer) confront and battle a myriad of evil organizations, criminal gangs, mutants and monsters as they fight crime in the future city of Washinkyo (Washington/Tokyo).