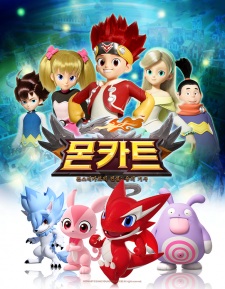 Plot Summary: Carmon Kingdom is a medieval style fantasy world where humans and monsters live together. Monkart Race is the most popular sport in the kingdom, as the highest ranker can be selected as knight. 12 year-old Jin of Latona Village also dreams to be the winner someday. One day, Destro, commander of the knights, invades the kingdom and tries to marry princess Sena. The princess escapes and comes across Jin. Their encounter awakes a dragon monster named Draka, who has been sealed in Jin’s sword. Now Jin, Sena, and their monsters start the most exciting adventures to save the kingdom.